They may be seen looking at their gadgets most of the time but young Filipinos today have been more engaged with society, albeit in new ways. Growing up in a milieu of staggering digitalization and disruption of conventions, young people are not just playing computer games but are engaging with others on a broad range of topics, including those of national and global interest.

The National Youth Assessment Study 2015 conducted by the National Youth Commission (NYC), offers significant insights into the Filipino youth’s perceptions of the society. Based on the survey conducted among 2,762 respondents nationwide, 69 percent actively participate in environment-related activities, 78 percent of the respondents believe that political participation is necessary to ensure good governance. Moreover, 90 percent expressed that they were proud to be Filipinos, and 50 percent stated that they were satisfied with the state of governance in the country.

The youth are popularly classified into two generations, namely, Generation Y or the so-called millennials (born in early 1980s) and Generation Z or the so-called Centennials (born in the mid-1990s). Both generations are closely linked by the technological backdrop where their lives unfold, providing them with multiple platforms and tools to be hyper-aware. Having easy access to vast news and information resources at a click of a button or a swipe of a finger, they are up to date with current social, cultural, political and economic issues affecting them. The internet and social media enable them to learn, connect, and express themselves in many different ways.

Filipino millennials and centennials are characterized as socially conscious and aspiring to have a greater purpose. In a survey entitled “Laws of Attraction”, research agency Kantar TNS found that millennial and centennial workers gravitate to companies that make a positive impact on society and the environment. According to the 2016 McCann Worldgroup’s global study on The Truth About The Youth, 96 percent of Filipino millennials are inclined to make a positive contribution to the community and 26 percent want to be remembered as someone who made a difference.

The Philippine government values the Filipino youth’s unique qualities and fresh perspectives on development and see the huge role they can play in the pursuit of inclusive growth and economic prosperity.

This is why the National Economic and Development Authority (NEDA) endeavors to rally and mobilize the youth to realize AmBisyon Natin 2040, which represents the collective long-term vision and aspirations of the Filipino people, especially the youth, for the country and themselves in the year 2040. In other words, AmBisyon Natin 2040 is regarded to be the picture of the country’s future.
NEDA began the visioning process in 2015 with more than 300 participants in the focus group discussions and close to 10,000 respondents in the national survey. Based on the results, Filipinos envision life of all Filipinos by 2040 as Matatag, Maginhawa, at Panatag – “All Filipinos enjoy a stable and comfortable lifestyle, secure in the knowledge that we have enough for our daily needs and unexpected expenses, that we can plan and prepare for our own and our children’s future. Our family lives together in a place of our own, and we have the freedom to go where we desire, protected and enabled by a clean, efficient, and fair government.” 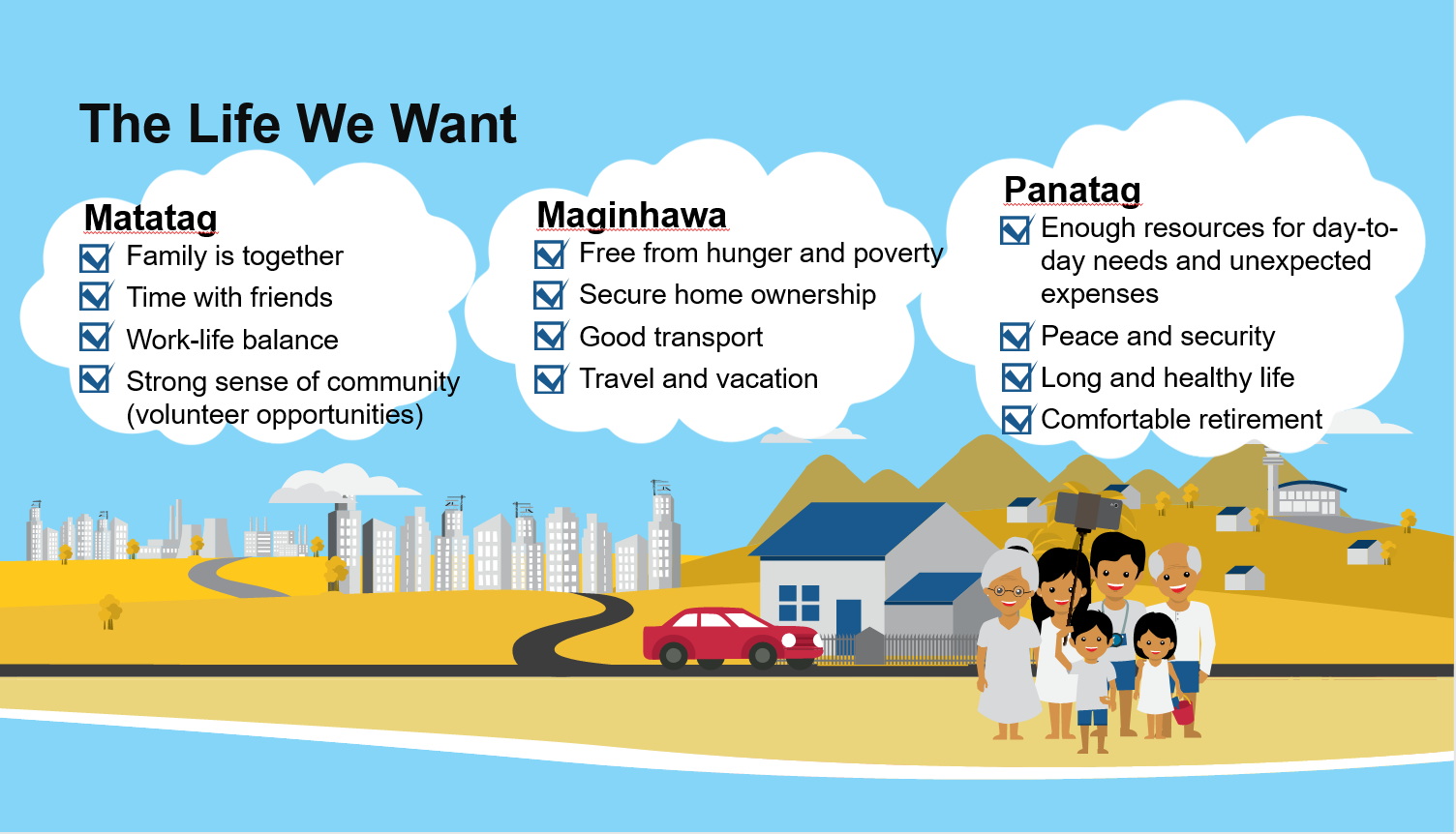 Since the successful launch, and following its official adoption through Executive Order No. 5 signed by the President in 2017, Ambisyon Natin 2040 has gained traction within and outside of government. NEDA has committed to sustain and increase awareness, as well as improve the appreciation of the long-term vision among Filipinos, particularly the youth who have the greatest stake in it as it is about their future.

For its part, the NYC is actively implementing the Philippine Youth Development Plan (PYDP) 2017-2022, which aims to maximize youth participation and make them proactive and responsible citizens. The PYDP is in line with the framework of the Philippine Development Plan 2017-2022 which aims to “lay down the foundation for inclusive growth, a high-trust and resilient society, and a globally-competitive knowledge economy” and pave the way for the realization of AmBisyon Natin 2040.

The Filipino youth are highly encouraged to build their leadership skills and strengthen their capacity to contribute to the attainment of AmBisyon Natin 2040. From critical issues such as poverty, health and nutrition, employment, housing, transportation, and quality education; the government believes that all members of the youth sector have significant roles to play in the 2040 development goals.

In line with this, NEDA will hold an event for the Filipino youth with the theme: “Lakbay ng Bayan, Walang Maiiwan”. The event will be a series of discussions led by Filipino youth leaders and role models to be held at the SMX Aura, Bonifacio Global City, Taguig on October 25, 2019.

Those who are willing to participate are encouraged to register by accessing this link: http://bit.ly/Ambisyon2040